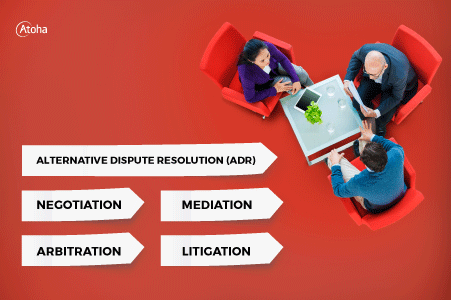 Negotiation is a process where two parties in a conflict or disagreement try to reach a resolution together. During a negotiation, the parties or their representatives (lawyers) discuss the issues to come to a resolution.

Mediation is a process where a neutral person assists the parties in discussing the matter and reaching a resolution.

A neutral person is a person who does not support either party in the conflict. This person is called the mediator, and they help the parties communicate. A mediator ensures that communication between the parties is fair and honest. The mediator is not a judge or an arbitrator and cannot take the side of either party, give legal advice, or provide counselling. Mediators can assist by clarifying issues, identifying concerns, and helping parties understand each other’s interests. The mediator can assist the parties in reaching an agreement between them but will not force the parties into a solution during mediation.

Mediation takes place in private and the decisions made are private. Mediation can take place in person where parties meet face-to-face for discussions. Or, the parties may be placed at separate locations where the mediator communicates information between parties.

Arbitration is a process where a neutral third party makes a decision. The decision-makers in arbitration are called arbitrators. There can be one arbitrator or multiple.

After hearing both parties’ sides of the story, the arbitrator will make a decision (in the same way as a Judge would in court). Arbitral decisions are sometimes called Awards. Arbitral awards are generally final and compulsory. An award may be filed in court and enforced as if it were a court judgment. It can often take a long time to receive an arbitration award.

Arbitration has many advantages over court hearings and litigation. For example, arbitration can be faster, more flexible, and less argumentative, intimidating, and expensive.

Negotiation and mediation are less expensive and less time consuming than a traditional Court proceeding. Arbitration can also be cheaper than Court proceedings; however, it depends on the cost of the arbitrators.